He wanted to talk to the “psychiatrist” as they had coined me. I was fresh out of graduate school in the middle of Southeast Asia in a village. My experience in mental health was minimal, but my heart for the profession was big. Throughout the past few weeks, in the different medical clinics we had set up in various villages, many had been sent to me with “problems in the head” as they called it. Most of them were suffering from some sort of depression, some of them were having visions that certainly presented like spiritual warfare, but him- none of the government officials had asked to see me throughout the month. The government had sent officials to keep watch over us as we ministered to the people. These officials had cameras and guns at times, and did their best to give off a, “we mean business” vibe. Our translators, all believers, helped us to share the Gospel by translating our words quietly. We would sometimes pray for our patients with our eyes wide open, so as not to look suspicious.

When one of the officials asked to speak to me alone, our team leader informed him that he would be meeting with us as well, for safety purposes. The official began a story of a dream that he continued to have. He said that he was terrified of dying; that it consumed him. He kept dreaming that he died and he was stuck in this fear. He told me that I had no option other than to help him overcome this problem.

Jesus was the only answer.

Without knowing it, he was asking me to share Jesus with him. Was this a trap? The smug look on the official’s face made me think maybe so. Yet, how could someone who had never heard the full Gospel come up with a trap as strategic as that? I glanced over at our team leader, and the look on his face told me what was going to happen next. Tears brimmed in my eyes.

The leader told him that, unfortunately, the very thing that he had prohibited us from saying was the only cure we had for him. I wept.

A year later, I saw the team leader at a wedding and he pulled me aside. He said he had been haunted by the fact that we did not share the Good News with this man. He apologized for leading me in that direction. I explained to him that while maybe he was a leader of the trip, my responsibility as a Christian was separate from that and that I, too, had cowered back. The truth is, we don’t know what would have happened if we had shared. We could have come up with all excuses for why it was wise to not- more time in the country, more citizens to share with, our families, blah.blah.blah. However, we are not called to personalize God’s commands with our own versions of appropriate. We are called to not be ashamed of the Gospel no matter the cost; and acting in fear and logic instead of obedience is in fact, in its own way, being ashamed.

Now, in 2015, we sit in a time in which we have been asked to open “our” land to the needy. We have been called to put aside fear and move forward in love, trusting God with His plans. Christ-follower: it may or may not be the end times; that is not for us to know. It is the time, however, to step up and be different from the world. To show a watching world that we believe in a God who overcame sin and death, therefore we have nothing to fear in it. Time to be a people who, unlike my friend who did not know the truth of the Gospel in Southeast Asia, do not fear anything but God Himself. It is time to display this love that knows no boundaries and shows no partiality- a love that is not the God of America but the God of the nations. We read the stories in Scriptures and hear about brothers and sisters across the world risking their lives for the sake of the Gospel- we find motivation and encouragement from this- and then- we go on to our personal agendas that might include visiting a soup kitchen or getting coffee with a friend and talking about Jesus, and we feel good about ourselves and our safe, comfortable little lives. We want to give to the cause, yet we don’t want to put ourselves or families in a place of risk for the cause. Simply put, we are putting comfort and fear above love. When you look at God’s Word, we are never told to fear anything, except for having a holy reverent fear of God. We are told that He is light and our salvation in Psalm 27. Psalm 111:10 says that the fear of the Lord is the beginning of wisdom; yet we masquerade protecting ourselves as being wise. God’s Word says that if we love anything more than Him-including our families- we sin (Matthew 10:37). It reminds us that He is with us in all things. It exhort us to not fear the one that can kill the body but not kill the soul (Matthew 10:26-33). We even see our brother in Christ, Paul ,writing from prison, telling us that we do not have a spirit of fear but of power and love and self-control (2 Timothy 1:7). He goes on to remind us that we are called to share in Christ’s sufferings, for the sake of the Gospel, by the power of the Holy Spirit. This is God’s Holy calling for His children. The Word says it plain and clear. There are way too many verses about serving the poor and needy than there is room on this post, but here are a few to keep in mind:

James 2:13- mercy triumphs over judgment, always. This is a place in which we are commanded to not show partiality to anyone.

Proverbs 31:8-9 tells us that we are called to open our mouths for the poor and mute and destitute; to defend the rights of the poor.

Proverbs 24:10-12 exhorts us to hold back those who are stumbling to the slaughter aka those who do not know the truth of Christ.

James 1:27 reminds us to visit (not go see- care for, meet them in their need) the orphans and widows.

Should we be doing this to our American neighbors as well? Of course. So many have said that there are many in America- both veterans and others- who are homeless and hurting and need our help. I could not agree more!

Does this fact negate the opportunity to love on our Syrian brothers and sisters who are hurting? Nope.

If your best friend’s family was suffering in the ways that the refugees are, it would be on the fore-front of your brain at all times to help in any way possible.

If these were your children, would you want someone to say they couldn’t help out of fear of the evil that could potentially come from it as well?

Are we not called to trust God to be our refuge and simply move forward, choosing to love regardless of the cost? How can they know that God is their refuge if we are not seeking to be a tangible example of this as His children?

Are people going to see Christ in the way we are treating their afflictions?

“Many who are first will be last, and the last first.”

I want to leave us with one simple question: Are we living our lives in a way that shows we believe we are called to put others first and ourselves last or are we spending our days attempting to look out for ourselves and our own as number one? It is clear that we should look different than the world and that the ways of the Lord are very counter-cultural. Does your life look drastically different? What we believe will always have an effect on how we live. I think the enemy loves watching us struggle and fixate on our own personal sin record and circumstances, because when we do that, we are not focusing on the things that matter most to God. Christ came to take care of sin once and for all. Yes, it is true that we should seek to make the outside of the cup reflect the inside. We should follow His commands in our actions. But, are we spending more time talking about how many alcoholic beverages are acceptable as a Christian, what outfit is most appropriate, what movies are okay to see, and what words are best to say; and, in turn, missing the greater truth that Christ died for all of our junk SO THAT we could spend our time loving instead of all our energy focusing on the things He died for? When we understand what God did for us on the cross, there should be so much overflow of gratitude and love and desire to share that same love with others that we don’t have room in our brains or in our schedules to talk about the color of coffee cups. 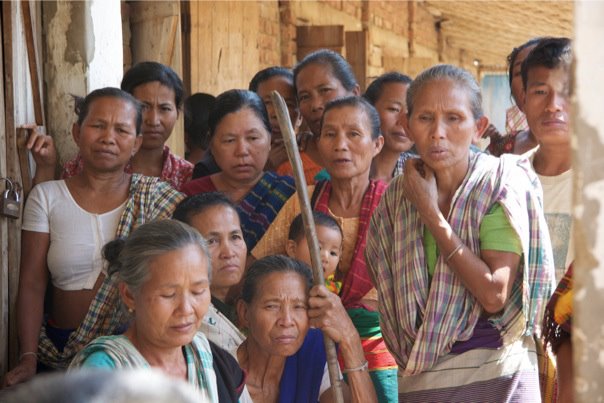 Friends, I know these words are strong. And if you are saying, ‘Morgan, what about you? What are you doing?’ I am right there with you. I am quite literally preaching to the choir. I cannot change my heart yesterday. But today, I believe we have the opportunity in front of us to be the hands, feet, and heart of Christ like our generation has never had; and this cannot be done as we sit in our living rooms with coffee in hand and Bibles open. Yes, this is where it starts– yet may we use these times to be moved to action to be Jesus in this broken world. May we, like many before us, trust in the God who says that He will be our strength and that He is mighty to save. The time is now. It may look and feel differently than we thought, but may we not be counted among those that the Lord says, “For a time will come when people will not endure sound teaching but having itching ears they will accumulate for themselves teachers to suit their own passions” (2 Timothy 4:3); or, “Truly, I say to you, as you did not do it to one of the least of these, you did not do it to me” (Matthew 25:45). Friends, may we wake up to the plans that He has for us, and may we believe that He is a good God who will power us with His Spirit to do that which He has called. May we not waste our lives fighting for the temporary and instead, may we hold fast to the God of the universe and the things that are eternal.

“Safe? Said Mr. Beaver; “don’t you hear what Mrs. Beaver tells you? Who said anything about safe? ‘Course He isn’t safe. But He’s good. He’s the King I tell you.” – C.S. Lewis, The Lion, The Witch, and the Wardrobe (Chronicles of Narnia)

One thought on “A Call to Wake-Up.”