The girls got fitted for AFO’s yesterday (a new type of bracing). From a therapeutic perspective, this will be used to help straighten out their feet and legs and put the surface of their little feet on the ground while they are in a supportive device. From a medical perspective, we hope this will strengthen their already osteopenia-prone bones. From a momma’s perspective, this is just one more thing to add to the list of an already long to-do chart. The fitting process turned out to not be for the faint of heart, and involved casting and a saw. Some screaming, crying, and resisting later, we left (all three of us) vomit covered; and the girls had blue markings up and down their feet and calves. The professional had explained to me that it would take a few days for it to go away. I was not convinced. 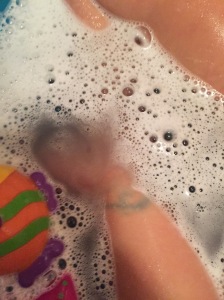 We got home, I put them (one at a time of course) in a very much needed bath, and I began to scrub.

I scrubbed, and I scrubbed, and I scrubbed; and the more apparent it was that the blue markings were not going to go away anytime soon, the more frustrated I got. The girls sit in an infant bathtub still for bath time. It is something they are growing out of quickly; yet it is necessary, and the next option costs in the thousands. Hugh does a better job of holding them securely in the tub, but my hold on them feels awkward at times. As I frantically attempted to get the ink off of Ally’s foot and leg, I felt my anxiety rising and the tears building. I was sweating from trying to remove the marker from her legs, and I couldn’t quite figure out why I was so upset from it all. Try as I might, the blue was just not going away. There was nothing momma could do.

“Ah, Lord God! It is you who have made the heavens and the earth by your great power and by your outstretched arm! Nothing is too hard for you.”- Jeremiah 32:17, emphasis mine

So many people have asked, at different points of our journey, what the hardest part has been. I can get distant, defensive even, because I never want to say these things out loud that often run through my head. I don’t want the girls, for a second, to feel like any kind of burden. They are such a joy, and outside of Jesus and Hugh, the best thing that has ever happened to me. But- so many moments- too many to count throughout the week- are emotionally and physically HARD. I realized as I was scrubbing the girls’ legs that it wasn’t in fact about the blue marker (it never is, is it?) This moment was hurting my heart because it represented the hardest piece of this God-given, blessed journey:

I can’t do anything about it.

As a momma, natural instinct tells you to see pain and dismiss it; to see a need and to quickly meet it. With Bailey Grace and Ally, there are many, many circumstances that I, point blank, cannot help. At night, when they are screaming in pain, we sometimes have absolutely no way of knowing the why. I will hold them, sometimes for thirty minutes at a time, having checked everything I know to look for and continuing to watch them writhe and scream out in pain, as if someone is stabbing them with a knife. Our physicians and we have sought out every area of their little bodies that could be the culprit, and while we have targeted some things correctly, there are nights that the hurt presents itself yet again, and we are left wanting.

When they look up at me, begging for momma to help, and I have nothing I know to do, I want to weep alongside them (sometimes, I quietly do).

It always passes, and they fall back to sleep shortly after, yet I often lay awake and pour out my heart to God, knowing He is not unaffected by His children’s hurt.

As the suds fell into the tub, and my tears began to well up, God opened my heart to a beautiful, healing truth:

Nothing is too hard for Him.

The God who made the heavens, the earth and all that is in it. The One who placed each star intricately into the sky and knows them each by name. He can count the grains of sand. He can calm the sea at any point in time.

Nothing is too hard for Him.

That being said, those moments that I want to say, ‘God- I can’t even’; He quietly yet confidently whispers, ‘I know. But I can’. He equips us for the things He places before us; and His determinations for all things in our lives, even the pain, are perfect.

Desperately attempting to scrub away the marks He intended to exist will get us nowhere.

If anything, it will add extra to the already.

Friends, there are pieces of each of our stories that don’t just feel too hard to bear- they are. As Corrie Ten Boom once said, we were not intended to be burden-bearers- that’s God’s job. We are called to cast all our cares on Him, knowing that He can handle it.

Are you trying to wash away something He has ordained?

Are you carrying around a load that needs to be laid at the foot of the cross?

Bailey Grace and Ally will wake up shortly, and the marks will still be there. Yet, as I look at them today, may it be a reminder of His love and not His absence. He is present with us in all things, and He desires for us to know- with that intimate knowledge I talked about yesterday- that every line He has drawn in our stories are for His glory and our good.

Friends, my prayer for you- yes you!- today, is that you would look at the marks in your current season, not in attempts to wash them away, yet in full assurance that they are gifts from His hand. And, when they feel like burdens instead of joys, may you lay them at His feet and allow Him to hold them.

The One who has scars on His hands and feet can handle the scratches, bruises, and lines drawn in each of our journeys.

May we rest in that today, giving Him the glory in ALL things. 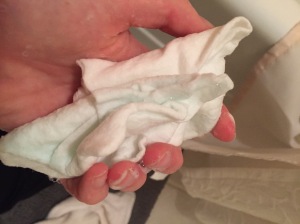 7 thoughts on “The Hardest Thing.”